Elin Hâf Taylor is a dedicated, talented performer, composer and musician. Having performed regularly in orchestras from the age of ten, she brings over a decade of experience and passion to every performance she gives. She is a first-class music graduate from Cardiff University, having received a Merit Scholarship to further her studies and achieve Distinction at Masters level.

A seasoned orchestral musician, Elin has performed extensively in England and Wales, and for international audiences in Germany, France, Belgium and China. Elin has experience as section leader in various orchestras; she was appointed principal cellist for the Cardiff University Symphony Orchestra in her first year at University, retaining the role throughout her bachelors degree. During this period she recorded two CD's with the orchestra, one of which premiered previously unheard works by Debussy. She was also principal cellist for the University's Chamber Orchestra, String Orchestra and Contemporary Music Group. Elin now performs with London-based Ashdown Sinfonia, North Wales Camerata and the North Wales Philharmonia. She has also been invited to perform as soloist for both the Cardiff University String and Concert orchestras.

Also a keen chamber musician, Elin has a long list of performances in varying genres and ensembles. These include performing Terry Riley's minimalist work, 'In C' at Brecon Jazz Festival and accompanying Catrin Finch at the Wales International Harp Festival. Elin's passion for chamber music led her to establish The Claret String Quartet in 2016.

Following the success of the Claret String Quartet at university, where they received masterclasses with the esteemed 'Carducci Quartet', they were invited to perform at Xiamen University, China, in 2017. The quartet also make a conscious effort to inspire the next generation of musicians by performing at schools, having performed at the British Junior Academy of Brussels and at events for Cardiff-based charity 'Making Music Changing Lives'.

More recently, Elin has took on the management of the North Wales based 'Brynafon String Quartet' who perform in recitals, weddings and corporate events. She also performs in an acoustic duo, Y2, with Welsh singer-songwriter, Arfon Wyn. Y2 performs original songs and traditional Welsh folk music.

Elin is committed to the music development in communities. In 2015, she curated the Cardiff Community Concert Series, providing free concerts for residents of Cardiff. She also works on creative music projects for adults with learning disabilities, performing improvisationally alongside Doniau Cudd (Hidden Talents), and providing music workshops with Canfod Y Gan (Discover The Song), both in association with the Canolfan Gerdd William Mathias in Galeri, Caernarfon. She is also a founding member of the North Wales Camerata, who raise funds to support music services in Wales through performances, regularly donating to the North Wales Youth Orchestra and National Youth Orchestra of Wales, both of which Elin is a former member. A firm supporter of the sustenance of youth music for future generations, Elin teaches strings for the Gwynedd and Mon Music Service and leads innovative music workshops for children. This includes a series of composition workshops held in Llanllechid primary school and for the Natioanl Trust property Penrhyn Castle, in the summer of 2019. She continues this work as music leader for Camau Cerdd (Steps in Music). Camau Cerdd provides specialised music lessons for babies and young children in an explorative and fun environment. For further information on tuition and workshop leading, visit the teaching page.

Appointed Musical Director of the Cardiff University Cello Ensemble in 2017, Elin is competent in leading ensembles and rehearsals. As well as directing this ensemble, this role also enambled Elin to further her skills as composer and arranger, having arranged nearly all repertoire performed by the group during the 2017 academic year. These arrangements ranged from jazz standards, such as 'Misty', Debussy's 'The Girl with the Flaxen Hair' and Philip Glass' String Quartet No.2 'Company'.

Having studied studio production alongside composition modules for three years at University, Elin writes and produces her own compositions. Her music combines both score and synthetic sounds, creating atmospheric music, which when combined with film captures the essence of the natural world. She often draws upon the folk tradition she grew up with in Wales for inspiration, of which her final MA studio project 'The Seasons of Snowdonia' was inspired by. Elin often gets behind the mic in the studio too, having sung lead vocals for Uzbeck band 'W-Double You' for their latest EP. She has the resource of a home recording studio and can offer remote recordings to composers. 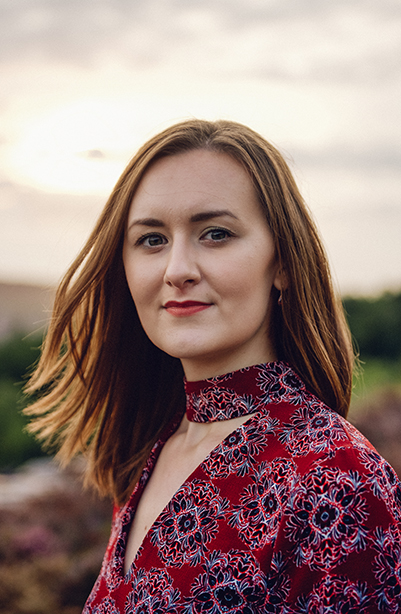